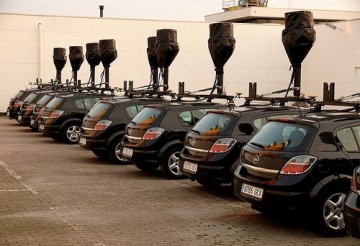 As part of Google’s Street View program which offers panoramic street-level photographs, vehicles are equipped with cameras and other recording devices, and sent out to neighborhoods around the world.

The company’s fleet of photo-snapping cars is equipped with Wi-Fi hardware to record the names and MAC addresses of nearby routers to improve Google geolocation services. From 2008-2010, those vehicles were also capturing tiny snippets of internet traffic from countless thousands of routers that weren’t employing encryption, turning every Street View vehicle into a rolling spy machine.

Subsequent investigation found that the electronic eavesdropping was part of an engineer’s 20-percent-time project.

Although the Department of Justice and the FCC have cleared Google of “direct wrongdoing,” the U.S. 9th Circuit Court of Appeals ruled against the company last September, indicating that Google may have violated the Wiretap Act, which prohibits the intentional interception, use, or disclosure of wire and electronic communications (18 U.S. Code § 2511).

Google, however, is claiming protection under an exemption that allows the interception or access of  “an electronic communication made through a . . . system that is configured so that such . . . communication is readily accessible to the general public,” in 18 U.S. Code § 2511(2)(g)(i). As Russell Brandon describes it on The Verge, “Google’s claim is that, since no one bothered to password-protect their network, the information on it was effectively public and not subject to the Wiretap Act.”

According to the Petition for Writ of Certiorari, Google is furthermore positioning unencrypted Wi-Fi communications as “radio communications,” or transmissions carried over radio waves (such as AM/FM radio and satellite television), which are not protected by the Wiretap Act’s prohibitions on interception.

Do we really think that unencrypted Wi-Fi communications are intended for “public” consumption in the same way that satellite television or radio broadcasts are?

The IPRH blog always welcomes your thoughts and comments. Feel free to send suggestions or feedback on this year’s theme of Publication to Bonnie Mak, the blog editor for AY 2013/14.